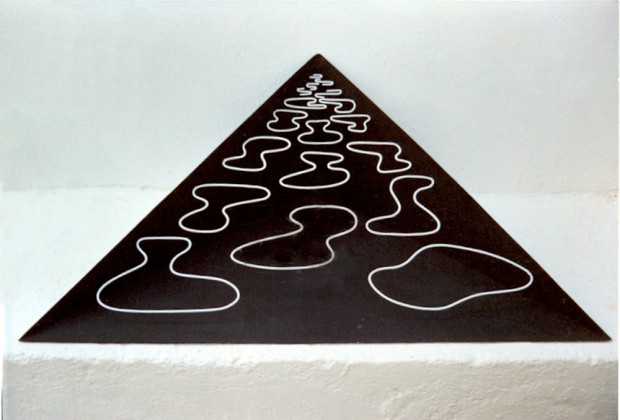 Domingo Díaz (Las Palmas de Gran Canaria, 1959) executed days ago his second individual exhibition at the University Campus in Tafira. “Charcal”, the name of the exhibition, supposes an important jump in the prominent career of that sculptor’s settle on Carrizal. In that exhibition, he tried to re-present another landscape.

He had already shown his interest in those sculptures that tidy up the territory, in its color and brevity, with the piece executed in 1992 for El Huerto De Las Flores to pay homage to Miró Mainou in Agaete.

His sculpture left behind traditional parameters in spatial composition as horizon, point of escape, vegetation, crags… A polygonal sculpture, a new metaphor appears. It was the territory like penetrable enclosure: Domingo Díaz’s locations seem unable to make without shadows, without movement precision of lights on those metal sheets along hours, without the impact of the rest of animals and vegetables on it. Díaz began, in short, to timidly raise the curtain of the World’s theatre in his Second Act.

After the award exhibit in San Antonio Abad in April 1992 – an extraordinary bet on new limits, on a new definition of support from which a new structure is drawn – Díaz betrays a special interest in displaying the territory like his “projections” over corners.

Díaz leaps to take up spaces and, which is more important, icons that have only been worked in sculpture in Spain from bases of mere use. Fragmentation of his reality, of his own space, then still limited, is articulated in vertices that don’t go to other vertex but the prime.

As happens in Luís Palmero’s work, the sign is taken off its character. The reduction of colour to bichrome strips off spectator’s alternatives. Corners hang over spectator. 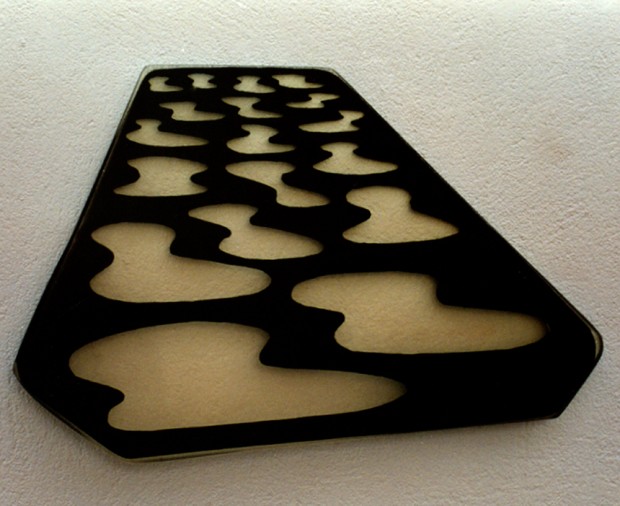 The structures of memories are articulated around eventuality of the moment, around movement in the work. In this way, Díaz articulates ambulatory seculars which don’t follow anything but the movement in the shadow over the iron.

That ungraspable character points the only vertex, the spectator. A world made of shadows produced by a world made of ideas, of projections. Violation tears of last space collectivity. The scratchy search for what stays impassively hidden. Behind every coat of paint, the first mirror reflection comes back.

The search of the other gives back a pale and furtive nomad’s image, who comes back to inhabit between empty projections. That’s the image hidden between borders of the work shown in May, 1993: “Casas de colores 2” (Coloured Houses, part 2).

In “Taragua”, Díaz shows with no doubt the opened fissure between inner territory and place. From that moment, water becomes the central theme of his work. Domingo touches the water but doesn’t submerge in it. His work pursues the always-equal vertices of the sea, of the pool, of the pond. Sinuous edges that want to reflect the wholeness but they are only profiles ceaselessly ongoing. The water that Díaz inquires drips through signifiers of a whole community. The reason, the aim appears densely populated by a real “background”. It doesn’t represent the same the concept “water” to all communities.

In this respect, the work exhibited by Díaz in “La Palmita” keeps a surprising parallelism of reading that is drawn by mercury in the Calder fountain. To every “wel-tanschaung” a new vocabulary response. And Díaz acts this way.