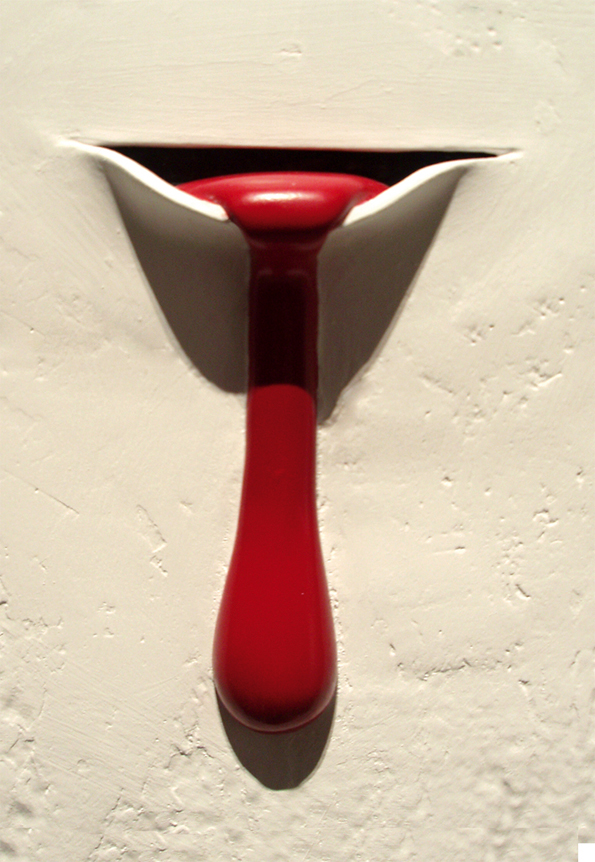 Domingo Díaz soaks into walls, of days he’s the favorite day, and he hide us by showing with his work imperceptible reasons: what we don’t see produces new views and in the occult of his work is the imaginary that allows us to think on what is not. The invisibility that he suggests in most of his work is also an open wound in walls that allows us to see his sensations and emanations of “space”… slowly and softly, little by little a dilated time appears like an architectonic wound. Within a closed space, it is what we can’t see, Domingo Díaz’s sculptorical work makes it clear so we can see what the metaphor contains: life fluids which get sure in the architecture that give us shelter.

Jorge Morales Moreno professor of Art History at the National School of Painting, Sculpture and Engraving “La Esmeralda” and in the Division of Science and Art to Design at the Autonomic Metropolitan University Azcapotzalco.

Finally, in the climax of territory, which is the “catarquic” part of the exhibition, we find Domingo’s work with one of Pedro Déniz’s. When I write “catarquic” I am referring, basically, to the game that both artists recreate with their work. With no opposition, they convert the space into a game place where Alice could be perfectly in Wonderland. Or in the other side of the glass. For example, Díaz unfolds a huge installation of a wound that makes the wall bleed with 3 meters drops, or a slender agave interweaved through the wall, competing with small installations or art-objects that reinforces the esthetic message: on the one hand, the wound on the wall, is small and from it emerges hesitant a drop of blood, so if we see it with the huge one, in perspective we would conclude that the wall, besides being alive, is hurt. The territory this way comes to life in the death throes. On the other hand, the final counterpoint is two big black eyes hanging on the wall which seem to see everything, including the spectator’s amazement. The white part of the eyes is suspiciously red; Díaz has entitled it “Desasosiego” (“Unease”) and it forms the background and context of Déniz’s latest installation.

The exhibition opts for a view as a territory full of possibilities not a geopolitical lesson and the way to show the complexity of migratory phenomenon is through Domingo Díaz’s work. His relieves emanates literally from walls to suggest men and women invisibility, shown in news such as desperations and migratory problems (from Cristóbal Colón to nowadays, migration is conceptualised as a problem and not as an alternative). Where is the human side of this people? Probably, only in the memory of those who have seen their drama and those who have lived it. The closing of the exhibition becomes an act to humanise the pain of migration, giving shape to ignominy through two relieves: “Sangrante” (“Bleeding”) y “Herida” (“Wound”). Domingo Díaz’s proposal goes straight to the core. He extracts from the wall blood that springs as testimony, fat blood drops which, like in the Brazilian Adriana Varejão’s work, spring from cracks. Their presence testifies that reality is not only what we perceive with senses but what is under the skin, upon our thinking, inside immigrant’s misgiving looking. Like the Mexican Indians during the resistance against the colony, they hide their idols behind walls which became into empty places of cult. In Domingo Díaz’s work the memory of crossing is hidden in the place and it comes to light when the memory calls it.