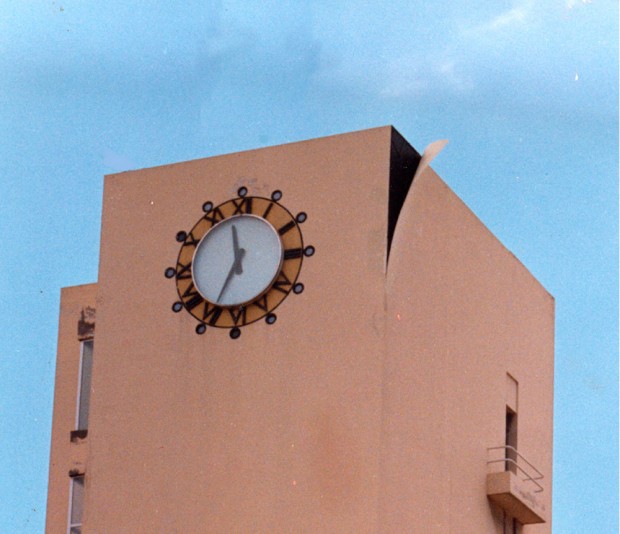 Domingo Díaz Vega shows us with a sculpture the intervention that he executed in the tower of El Cabildo Insular de Las Palmas, consisting of a sheet of steel in the top of the North West corner. Once the piece was installed, it seems that the skin of the tower was falling, like if it was made of paper or cardboard.

This emblematic piece of International Movement in Canary, made by Miguel Martin Fernandez de la Torre, is a key place where political decisions, important to our island are made. There walk the politicians who have to “change the skin” in every term to bring themselves into the changing times in which we live. With this little intervention, he was looking for the sensation of losing the real scale in building, by emphasising the contradiction between a mock up and the building when it “dresses itself up” like the others or kidnaps its apparent precariousness. He talks to us about fragility on which modernity and its paradigmatic condition are based.

He also prophesies the imminent change of skin in the building- considered in Alejandro de la Sota’s project- the building has to metamorphose himself to keep on being modern.