The worn blesses the plow

That breaks him in two. 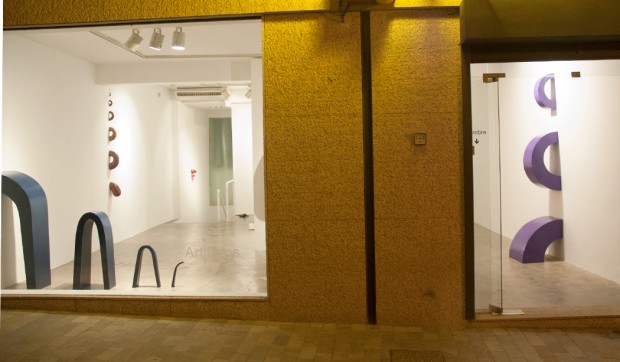 Hardly ever Arts and History walk together, except when this one decides to contradict or repeat itself up to nausea. A dividing wall falls (Berlin, 1989), another one is erected (Palestine, 2004) and they threatened to erect more barriers with the sense of strength.

And meanwhile, what are the artists doing? Painting walls with graffiti and taking photos of the barbed wire that crowns them; spitting colors and shapes in the walls of public schools; hanging nets made of protest along streets; only to express their way what they can do. Everything in their power to survive so many commotions as History receives from its alleged figures.

Domingo Díaz takes his CV added to human common incidents almost always leaning on walls, not to support them but to subvert their geometry and normative gravity. Walls have been on his favorite support in the last productive decade. He has always had a real gift for generate powerful visual atmospheres. But it wasn’t good enough for him his enormous insects “landing” in La Palmita, he had to put himself on the walls, to raise our eyes to those corners that represent- almost define- the highest thing: conscious.

He did it to reap them in bits almost ectoplasmatic like a frame of shimmering portraits made of open-air; by following the disturbing route of optical illusion that he proposed as an emergency-poetic in view of new time worries. Mystery and creativity were resolved with the impeccable work of who imagines the finish as a required contemporary reflection, which goes beyond the aesthetic fact. Other times, he has chosen the modular canon by conceiving elegant waves and extracts that invite us to take them like seats (Miller Building exhibition).

This time those modules have a ceramic body in enamel earth ware, raise our spirits and make darker and bluish the visual translucence. Or they assume a metal body and climb the wall disappearing in it and showing themselves at intervals, with no apparent intention but to create a visual illusion that we can follow easily. Luckily for us, the sense allotted to optical illusion (Westerdahl would say “evasive”) invites to numerous interpretations that can be integrated- or even disintegrated- in winding path of the meaning.

One of that interpretations is to see them like a transverse instrument of physical currents knowledge, if we follow the artist’s thoughts when he call the Fluid Spaces imaging how blood would flow, sweat, seminal ink, if they climb walls. So, the organic metaphor would be served to those who prefer the presentative way. However, there are possibilities much more opened to dialogue with the theory of space, as is shown in contemporary sculptures and this is the representative innovation that we prefer to hold right now. So, let’s take this work as an assessment of mental space and let’s hold too the gratification that our eyes process on it like recreational pieces, and not like the questions that they are. Sensorial advantages which perhaps drive us to assign sense. Then, this coil of alchemist seems to explore, more than sublimate, the interval of which is tangible and real with the recreational logic. Stimulating metaphor about integration- Down with walls! – and reproduction assisted by Art, which blesses the worm of proverb. Diaz’s art has been escaping from environmental banality (that infection of incompetence and crafty tricks which populates all roundabout of this island) due to the extreme rigor of his work. His most recent work, from his workshop in Carrizal, only extends his visual fame in trompe l’oeil, what means a trick in the eye: a trick or illusion that makes people see what is not. An optical dodge in the imaginable mystery behind the wall. It’s a very used technique in ornamental arts, which is normally called <<effect>>. “Díaz effect” is hypnotic, because he hangs for a while those delayed in his work, until they notice that time goes by and there is still a lot things to see. That proves that the effect has been maturing in the arts and he can call it creativity. This quality is only get by the isolation and the own exigency, ruling out expressing himself in clonal or scholastic substitutes so used in present sculpture.

What Domingo Díaz, a trustworthy artist, does is to check the continuity in the excellence of a work that is faithful to his reflection- before called inspiration. Always with his voice, distant from clonal “following” proposed to us as sculpture. That qualitative magnitude justifies his long absence from galleries and exhibition halls: he was charging his batteries to go back to the battle after some below the belt.

Domingo’s talent shouldn’t be lost in an insular desert so lacking in opportunities for artist, but look for his expansion in Terra Firma. Where maybe coarse people also paint, but there are much more eyes ready to let them be carried by the poetry of space. By creativity, what really defines this sculptor unfairly hidden in the local tangle.