This time, Domingo Díaz is getting closer to landscape subject with an exterior sculpture called “Taragua”. Although he wanted to reflect the undulating movement of water, giving rise to a naturalistic interpretation; the work owns an abstract formalization as a counterpoint. Its interest just lies in the fact that Díaz has achieved to become water in a sign, updating it in itself and making it free from every single romantic reading, in its formulation and its constitution. “Taragua” has to be included in a symbolic series that he has been developing in recent years. Another work called “Zero” is also part of this series.

Díaz reflects again on shapes, spaces and signs, using the irrationality to create a sculpture made by two separated pieces, almost symmetrical, which generates an intense dialogue between them. The space between them is the water, so the shape is the bottom here, in a transposition of roles that allows links in the environment of the work. This time, the accompaniment has been realised meanwhile the melody performs the architectonic space; the people moving; the city. The melody, like water, has her own cycling movement, too; and even if people, buildings or streets are not the same, the city still exists. Like the flow of a river that never has the same water, being born is the logical consequence of its own death.

This is, therefore, a work designed to be outside in urban zones, it would make no sense anywhere else. It is not a decorative sculpture at all, although it’s beautiful per se, because it hasn’t been done to decorate, but to show and demonstrate that we are part of a Nature made of strict and cyclical laws. Nature means born, beginning, spring… but death and ending, too. 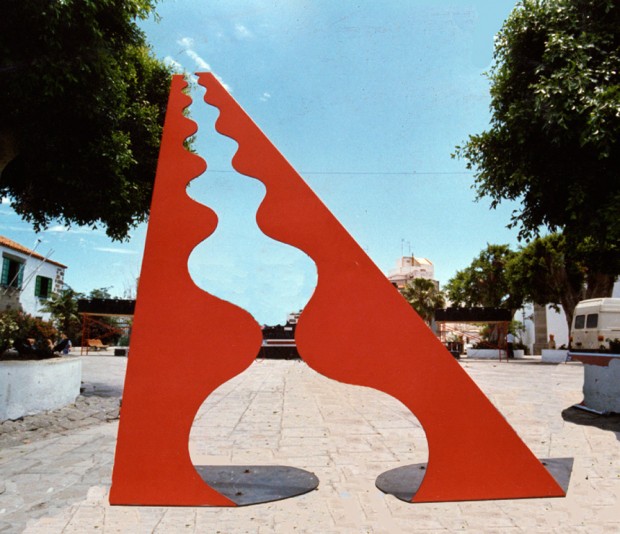 In Taragua, he speculates about pure shapes by using similar principles to those defended in a moment by minimalist, such as: reductionism of shape to minimal states of complexity and economy of resources.

This creator likes placing his plastic speech in border spaces between different artistic disciplines. We have to remember the walls in the room San Antonio Abad in the excellent exhibition called: “Other Limits” where some of his pieces came close to architectonic postulate, whereas other, linked them to the geometric picture by using iron sticks as strokes of a drawing.

In this case he comes closer to painting by refusing the third dimension, inherent in the sculpture. So we could assure that it’s a sculpture due to the importance of casted shadows and the extrados of the work. However, the sloping line of a centimeter that configures the shape of the work has also a sculptural character, with minimalistic nature and, to me, with a big interest to the object.

Two colors: black and red alternate in the different faces of the work, going further into this pictorial character. The red, as the color of the earth; whereas the black, emphasizes its task as a quiet background of an environment that is always flowing.

What really remarks this work is its false perspective. Not only water as a metaphor of living, but also the light, the air, the sky and everything that can be seen and felt across her.